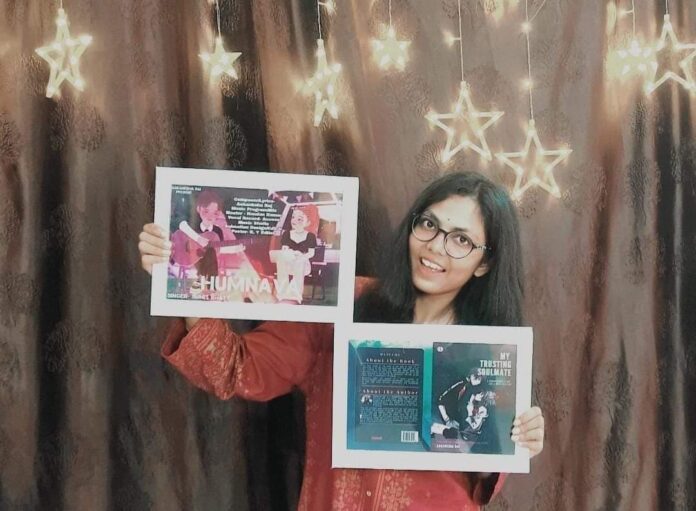 Aakanksha Raj is a management student. She was born and brought up in a middle class family in Madhepura,Bihar. Her dream is to become a successful human being and novelist in the field of writing. Raj has achieved many certificates with her most dedication and talent. She believes in herself or book. Raj believes in Lord Krishna and Goddess Radha’s honesty , never give up nature, and love. Raj wrote her debut novel “My Trusting Soulmate” at the age of 19th. Her first focus is on picking issues like love, relationship, dream and career in nature. Her novel is based on it.

Raj has participated in many anthologies as a co-author, working in one international anthology. She got two award : Bharatiya youth face of India or Best debut author award 2021.  She is also a composer/ Lyricist. Her first song is “Humnava” which was released yesterday. About Song “Humnava” by Aakansha Raj

This story is about a couple who are unable to give time to each other.  There is a one-sided conversation in which the boy tells the girl to complain about his emotions. Every feeling has been shown very beautifully.  The writer has very beautifully threaded his feelings into the word. Sadness, happiness, grievance, love and hope have been shown very well in this song.

After listening to this song, it will not seem that there is any boring song. The music is also given very well. This is a solo song. Which is produced, composed and written by Akanksha Raj.

Watch and Listen to the song Humnava by Aakanksha Raj

Aakanksha was interviewed exclusively by India Stories Live on 1st July, 2022. She shared about her song, personal life and books in the highly interactive video session, hosted by Patri Sahiti.

About the novel: ‘My Trusting Soulmate’ by Aakanksha Raj
Overview:

Aakanksha Raj has chosen the romance genre to write her very first novel. The crux of the novel, My Trusting Soulmate, is the story of two characters who face challenges in their relationship but eventually end up loving each other unconditionally and unapologetically. It is a modern-day love story with twists and confusion. The characters undergo a state of dilemma and delusion but they always find a way out. Readers may find out the romantic suspense in the novel as there are a lot of surprise elements that will keep them interested and make them want to read more once it has ended. The main theme of the novel is the idea of love. This novel is dedicated to all the lovers who know what they want in life. The beginning of the book will make you wonder about the upcoming events. It also reveals overwhelming and out of the blue incidents in the lives of the characters. The end, on the other hand, is emotionally satisfying.

“A human heart is not like a math problem with only one answer”, states Aakanksha Raj in her debut novel, “My trusting soulmate”.

Raj portrayed the story of two very different people, Misha and Mallay; who despite the hatred, conspiracy, and tricks, eventually fall in love with each other. Viewers may see a lot of surprise elements in the story. It all starts from a disturbing phase where both of them are in a hospital fighting for their lives. The doctors manage to save Misha who strongly believes that the accident happened because of her.